The Battle of Fort Fisher, N.C.

8.  Two officers who fought at the Battle of Perryville were fathers of significant World War II generals.  Simon Buckner commanded a third of the Confederate Army and the 24th Wisconsin Infantry had Arthur McArthur.

Simon B. Buckner, Jr. was killed in WW II and the Wisconsin regiment had the father of Douglas MacArthur.  They were the only two father/son duos to ever receive the Medal of Honor.

9.  Perryville Battlefield has maybe the first monument dedicated to Confederate dead paid for by the U.S. government.

10.  Perryville State Battlefield Site was established on October 8, 1954, 92 years after the battle.  By 1952, the battle site had deteriorated badly and the Perryville Lions Club rehabilitated the small Confederate cemetery and surrounding area.

They got the Kentucky State Conservation Commission to create a state park that opened on October 8, 1952.

The Kentucky Campaign, 1862-- Part 2: The Battle of Perryville

4.   A severe drought in the region drew both armies to Perryville.

5.  The Union Army greatly outnumbered the Confederates but only one corps was significantly involved in the battle.

6.  Famous Confederate diarist Sam Watkins declared that Perryville was the "hardest fighting" he  experienced during the war.

"I was in every battle,skirmish and march that was made by the First Tennessee Regiment during that war, and I do not remember of a harder contest and more evenly fought than that of Perryville."

7.  Small quantities of Henry repeating rifles were used at Perryville, probably the first time they were used in combat.  The Henry rifle was the predecessor  of the more famous Winchester lever action rifles.

Posted by RoadDog at 1:18 PM No comments:

Back to the Discussion Group, the Kentucky Campaign 1862-- Part 1

We've been doing a bunch of RoadTrippin' Through History on this topic when I started finding out about one of the three major Union leaders in the campaign, one Charles Champion Gilbert, whom I had never heard of.  That led to his brother, who also was breveted to a general,  Samuel A. Gilbert and then, people buried in the same cemeteries they are in.  That was quite a bit of RoadTrippin' but I found out a lot of interesting stuff.

Anyway, back to the topic at hand for the October 2021 discussion group in Crystal Lake at Panera Bread.

I based most of what I had to offer to the discussion on this list of ten facts about the Battle of Perryville from the American Battlefield Trust.

1.  The largest battle fought in Kentucky during the war.

2.   Considered the "High Water Mark" for the Confederacy in the West.

3.  At the time, it was the second bloodiest battle in the Western Theater..  The Battle of Shiloh was the first.

Posted by RoadDog at 4:20 PM No comments:

These people are buried where Gen. Charles C. Gilbert is.

**  There are a lot of Union generals and some Confederate officers buried there.

Union Navy Medal of Honor recipient.  While the pilot aboard the Union steamer USS Signal proceeding up the Red River  5 May 1864 engaged a large force of enemy shore batteries until the ship was completely  disabled.  Wilkes remained at his station the whole time with his hands on  the ship's wheel until a bursting shell destroyed it.

After the war, he became one of the best steamboat men  between Pittsburgh and New Orleans.

Confederate Army officer and author.  As a private, he was captured in 1863 during John Hunt Morgan's Ohio raid and escaped, eventually making his way to Canada and then back to the Confederacy.  He was made a lieutenant and sent back to Canada where, on October 19,1864, he led a raid on St. Albans, Vermont.

Posted by RoadDog at 5:40 PM No comments:

From the American Battlefield Trust 2022 calendar.

Posted by RoadDog at 7:31 PM No comments:

Buried at the cemetery along with Charles C. Gilbert.
JULIAN PROCTOR "PAPPY" VAN WINKLE, SR.  (1874-1965)
Businessman known as "Pappy" Van Winkle, he is the namesake of the premium bourbon of the same name (Old Rip Van Winkle).  Other brands his former company produced were Old Fitzgerald and Rebel Yell.  (I'm quite fond of Rebel Yell even though they changed its logo.)
***********************
CHARLES L. "CHARLIE" WARD  (1838-1875)
Songwriter, Confederate soldier and musician.  Well-known writer of minstrel and ,olotary songs in the 1850s and 1860s.  He wrote the words and/or music to such songs as "I'm Coming to My Dixie Home," "Think of Your Head in the Morning," "The Faded Gray Jacket" and "The Kentucky  Battle Song."
There has been speculation that the  tune "Dixie" was actually written by Charles Ward, with words by  Will S. Hays (not by Daniel Emmett)
During the Civil War, Ward  was the Chief Musician of the 4th Kentucky Volunteer Infantry, CSA, of the famous Kentucky Orphan Brigade.
Bourbon and Dixie.   --Old Secesh
Posted by RoadDog at 2:41 PM No comments:

In 1864, he was appointed Secretary of the Treasury by Abraham Lincoln.  Brother of Joshua Fry Speed.

Friend and confidant of future President Lincoln in Springfield, Illinois.  During the Civil War, served as Lincoln's Western Affairs advisor and was offered the position of Secretary several times but refused it.

Journalist and author.  Internationally recognized "Gonza"  journalist.  Had a big best-seller with "Fear and Loathing in Las Vegas."

RoadTrippin' with Gen. Charles Gilbert-- Part 4: All That Chicken, Geography and the 'High Five'

When I go RoadTrippin' Through History with someone, such as in this case, Charles Gilbert, one of the things I do is go to the cemetery where he's buried and see if there are any names that pop to interest.

There are a lot of then in Louisville, Kentucky's Cave Hill Cemetery.  Here are some more:

Well, we all know him and that chicken of his.

Geographer and advisor to President Wilson at the Versailles Peace Conference in 1919.    Helped establish Georgraph as a legitimate field of study.  First woman ever placed in the president's position of any national academic organization in the United States,   Association  of American Geographers.

Georgraphy was my college minor.

Starting forward for Louisville's 1980 NCAA Championship Tea, and played in NBA.  Given credit as the "High Five" creator.

Posted by RoadDog at 3:29 PM No comments:

The McHenry County (Illinois) Civil War Round Table discussion group will meet tomorrow from 10 am to 11:30 pm at the Panera Bread Company on US Highway 14 (Northwest Highway) in Crystal Lake, Illinois.

The topic will be "Lee's Generals."

We are meeting in person and via Zoom.

All are welcome, so come on in out of the heat.  (And, we do sometimes stay somewhat on topic every so often.)

Charles Gilbert was buried at Louisville's Cave Hill Cemetery.  Here are some other persons of interest buried there.
**  ANDREW J. COWAN  (1841-1918)
Scottish-born Union Army artillery officer.    At Gettysburg, his battery was posted just south of the copse of trees during Picket's Charge.    Ordered his cannoneers to fire double canister.
**  PAUL HORNUNG  (1935-2020)
Heisman Trophy recipient and Pro Football Hall of Famer.   Played got the Green Bay Packers.
**   A whole lot of Union and Confederate officers and generals.
**  JAMES D. "BIG" PORTER (1811-1859)
Small as a child, but started to grow at age 17.    In three years, he grew to the height of 7 feet 8 inches.  Around 1830, the name "Big" was added.  Also known as the Kentucky Giant.
--Old Secesh
Posted by RoadDog at 9:51 AM No comments:

Some other folks of interest buried at Louisville, Kentucky's Cave Hill Cemetery:

JOHN BRECKINRIDGE CASTLEMAN:  Confederate Army officer.  Was involved with the Northwest Conspiracy in 1864 to free Confederate prisoners of war at Camp Douglas in Chicago.  Led guerrilla force to burn supply boats at St. Louis.  Captured and sentenced to death and spared only by personal intercession of Abraham Lincoln

After Lincoln's assassination, he was deported to France.  Returned to U.S. in 1866 after a pardon from President Andrew Johnson.  In 1898, he led the 1st Kentucky Volunteer Infantry in the invasion of Puerto Rico during the Spanish-American War and later became the island's governor.

His statue in Louisville came under attack and has been removed to be placed by his grave at Cave Hill Cemetery.

MERIWETHER LEWIS CLARK:  (1846-1899)  With a name like that, he'd have to be related to somebody famous.  Actually, he was the grandson of famed explored William Clark.  (Wonder where he got the names Meriwether Lewis?)

Posted by RoadDog at 2:38 PM No comments:

Back to the McHenry County Civil War Round Table  discussion group meeting from October 23, 2021.  This is where all the Gilbert posts from the past month have come from.

He is buried at Cave Hill Cemetery in Louisville, Kentucky.  A glance at some of the other people buried there shows quite a few folks of interest.

Some of the burials:

GEORGE ROGERS CLARK  (1752-1818)  Ranking U.S.officer in the Old Northwest during American Revolution.  Noted for captures of Kaskaskia and Vincennes.

Posted by RoadDog at 3:07 PM No comments:

Roadtripping with Samuel A. Gilbert-- Part 3: Politicians and Brigadier Generals

**  ELEAZER ARTHUR PAINE 1815-1882):    Graduated from West Point in 1839.  Colonel of 9th Illinois Infantry.  Commanded 4th Division of Army of Mississippi at battles of Corinth,  Island No. 10 and Fort Pillow.  Placed in command of District of West Kentucky and deployed his corps to protect railroads from Confederate  raiders from 1862 to 1864.

Formally reprimanded for  brutality toward citizens  and violating their civil rights, he resigned in  November 1864.  After the war was a lawyer.

**  Quite a few Union brigadier generals and Minnesota politicians.

**  JOHN BENJAMIN SANBORN (1826-1904):  Brigadier General.  Led troops at Battles of Iuka Corinth and Vicksburg.  After war sent to western frontier to subdue hostile Indians and attempted mediation  of difficulties between Indians of Indian Territory and their former slaves who had been freed by the 13th Amendment.

This Month in the Civil War-- Part 2

From the American Battlefield Trust 2022 calendat.

**  Riots erupt in New York City in protest of the draft.

**  President Lincoln presents to Emancipation Proclamation to his Cabinet.

Battle of the Crater at Petersburg, Virginia.

Posted by RoadDog at 9:52 AM No comments:

MCCWRT Meeting Today Talk Will Be Mysteries of the Hunley

The McHenry County (Illinois) Civil War Round Table will be having our monthly meeting tomorrow at the Woodstock Public Library in that town.

The topic will be of great interest to me because it is on the Hunley.  I'm really into all things naval during the war.

The speaker is Bruce Allardice and the subject is "Mysteries of the Hunley."

It will be in person or via Zoom (and we're slowly getting better at that).

Some of us will be getting together for a pre-presentation meal or snack at 3 Brothers Cafe on Il. Highway 47 in Woodstock at 5:30.

The meeting starts at 7 pm.

Everyone welcome, even non-members.  Just an interest in the war is all you need.

Posted by RoadDog at 3:34 PM No comments: 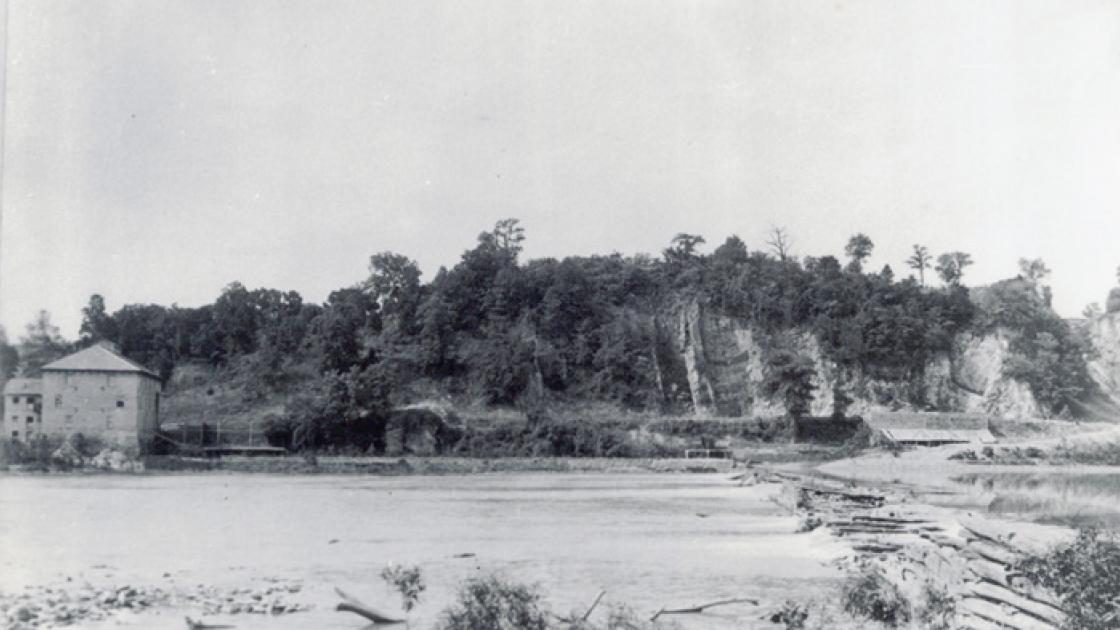 This is the area where Lt. Crocker and the 118th Pa. were operating showing the brick building, bluffs and dam with the Potomac River in the foreground. (American Battlefield Trust) See Jan. 2022 posts. 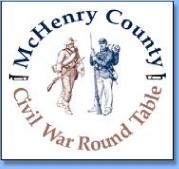 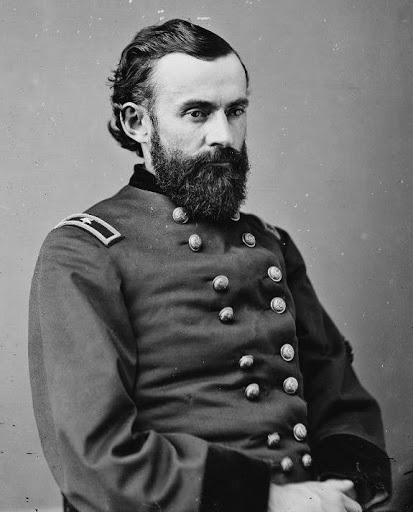 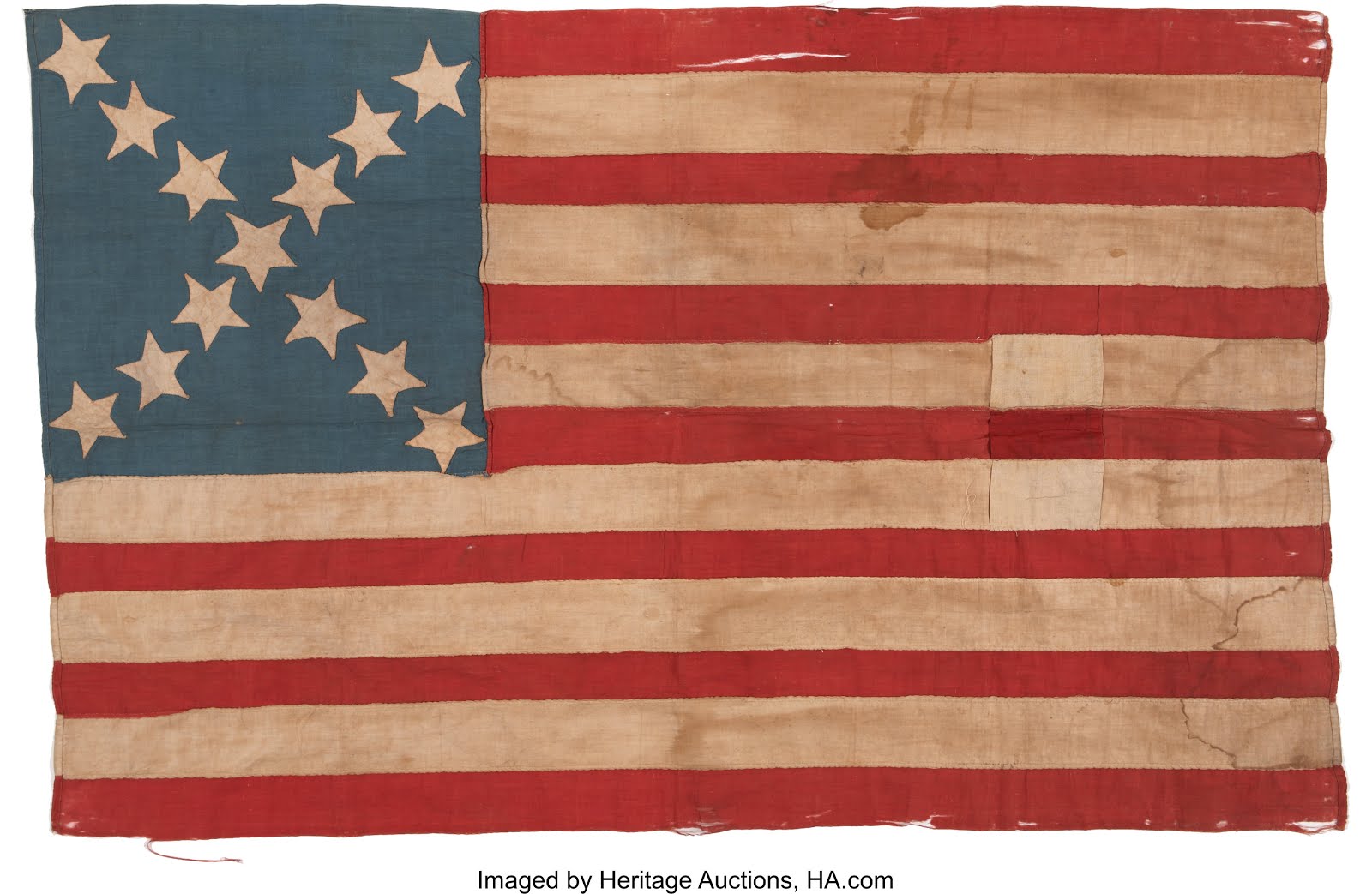 Confederate National Flag prototype? See May 1 post. There is another prototype flag picture below this. Both clearly showed an influence on the Confederacy of the U.S. flag. But, they very likely would have caused problems on the battlefield. 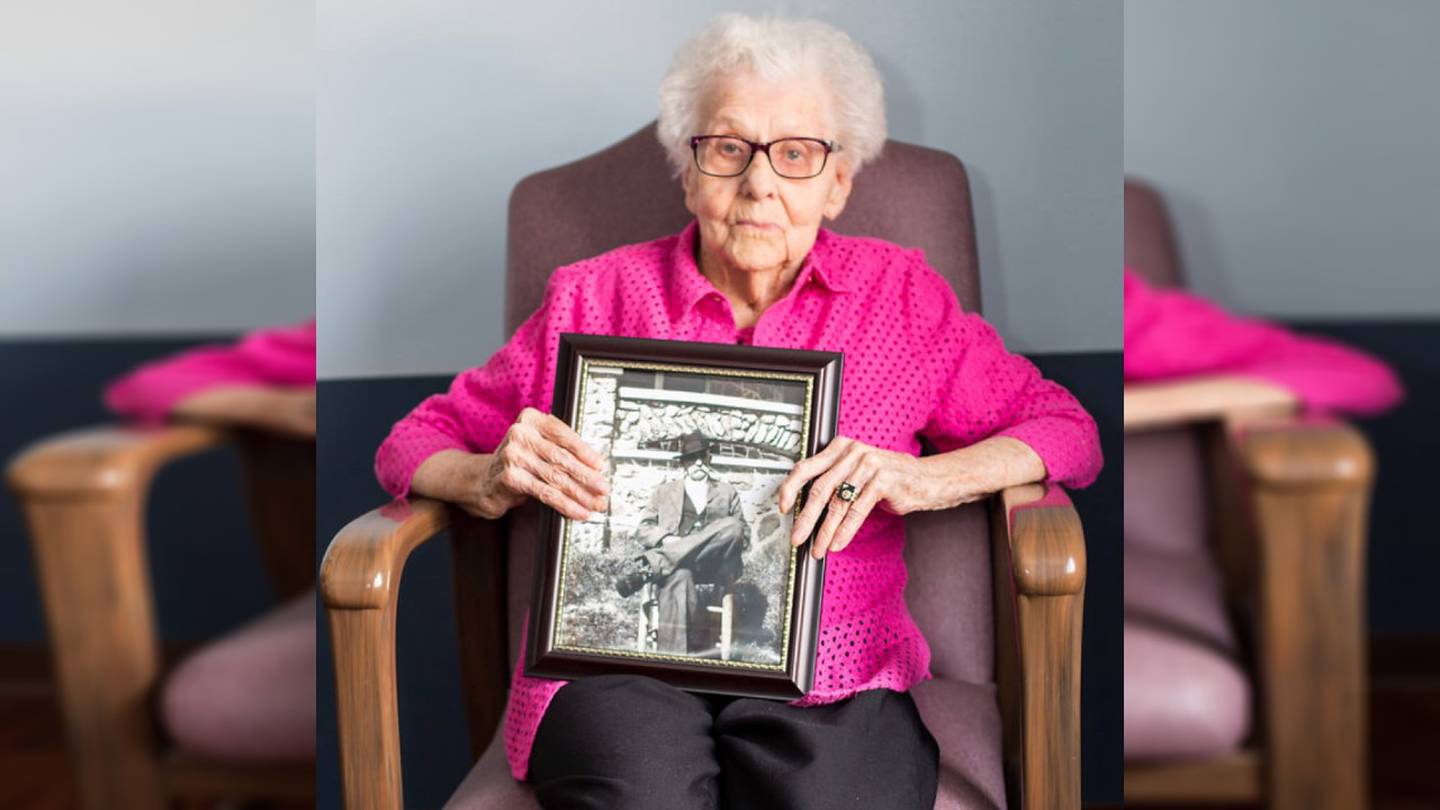 Robert Gilchrist's proposal for Confederate Flag, Feb. 1861. An interesting design indeed. Do you think I could fly this and not get in trouble or have a riot? See Dec. 30 post. 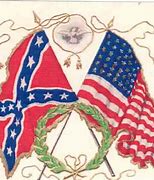